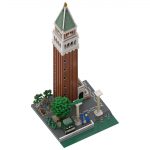 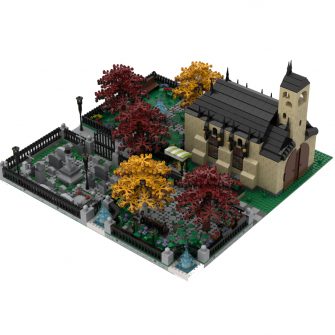 Earn 370 points upon purchasing this product.

The Bell Tower of San Marco (Italian: Campanile di San Marco) is a bell tower in Venice, Italy, located near Piazza San Marco, near the front of the Pontifical Cathedral of the San Marco Valley, and is one of the landmarks of Venice.

It is 98.6 metres high and is a simple structure, the lower half of which is a huge column of brick, 12 metres long and 50 metres high on each side; above it is an arched bell tower housing five bells, and above the arched bell tower is a square structure with a façade decorated by a lion and the Venetian female symbol (la Giustizia).

At the top of the bell tower is a pyramidal spire with a golden weathervane in the shape of the angel Gabriel placed at the tip. The present form of the St Mark’s bell tower was built in 1514, but it collapsed suddenly in 1902 and was later rebuilt in 1912.

“The Campanile and Surrounding area contains the Campanile itself, THE landmark of Venice – Italy and a true landmark in any Lego city, and some scene in the vicinity to form a consistent colorful MOC. You’ll furthermore find the columns on Saint Mark’s Square near the waterfront, the Royal Gardens next to the columns and a typical Venetian kiosk. One of the columns has a crcodile on top. I chose a green one but a tan one is just as good. The lion on the second column is not in the pictures due to absence of it in Studio but it is integrated in the parts list. The garden consists of two modular elements that can be switched and/or turned to give the model a different look as you seem fit.” 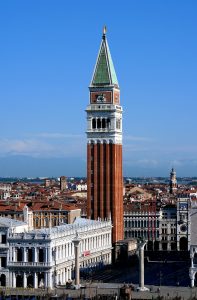