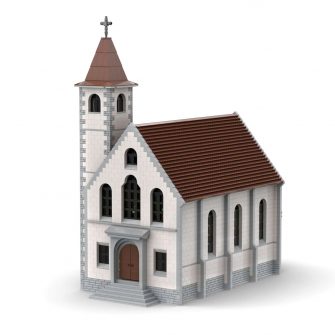 Earn 870 points upon purchasing this product.

Falkenstein Castle (German: Burg Falkenstein) are located in the Weinveldt region of Lower Austria. The castle was used as a “Reichsfeste” to protect the HRE Reich, which overlooks almost the whole of Moravia. It was founded around 1050 by the Emperor Henry III. In 1106 the castle was purchased by the Austrian Margrave Leopold III, after which it became the property of the Austrian rulers. 1572 Maximilian II sold Falkenstein to the Baron (later Count) of Traussen.

Black and white elements are used extensively throughout the building and the whole atmosphere has a strong Gothic feel to it. The proportions are just right throughout and the castle is exquisitely textured.

The white paint on the rooftops and curtain walls brings about a stately atmosphere. And the black on the roof has the same visual effect. The whole atmosphere is very typically Gothic, as if one were in medieval Europe, and to make it even more special and unique, the builders have added forest elements around the castle to liven up the whole atmosphere.

Perfect Display of Many Functional Design and Detail Display : The size of the finished castle model is approximately 75cm in length, 38cm in width, and 45cm in height. It is designed and restored according to famous European architectural scenes, with multiple architectural details, wooden bridges, exterior walls, huts, towers, etc. The proportion is right, the appearance is magnificent and luxurious. The base of the castle is built with black gray and green building blocks. It is equipped with small woods. The building is white and black tiles. The details are extremely shocking, and the playability and ornamentation are very high
.Build Your Own Ancient Castle Street View Building: Build and experience an exquisite ancient castle collection .Rich details in appearance such as gothic architectural style, door courtyard, cloister, well, wooden house, present Ancient architectural style, chick, creeper and other detailed decorations

. You can join our fackbook gruop: @Amazing Medieval MOC , for more  information or giveaways. 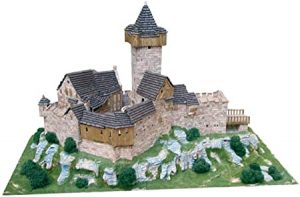 An great moc model. Good details. The assembly instructions are a little inaccurate. The salesperson responded quickly to the news. Very satisfied with the quality of the details.